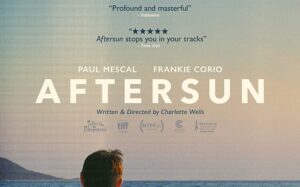 In Aftersun, in the late 1990s, eleven-year-old Sophie and her father Calum are vacationing at a club on the Turkish coast. They shower, play pool, and enjoy each other’s friendly company. Calum becomes the best version of himself when he’s with Sophie. Sophie, meanwhile, thinks anything is possible with him. When the young woman is alone, she makes new friends and has new experiences. As we savor every moment spent together, a sense of melancholy and mystery sometimes permeates Calum’s demeanor. Twenty years later, Sophie’s memories take on new meaning as she tries to reconcile the father she knew with the man she didn’t know.