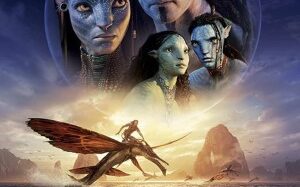 Avatar: The Way of Water

In Avatar: The Way of Water, sequel to Avatar (2009), ten years after Pandora’s first battle between the Na’vi and humans, Jake Sully (Sam Worthington) lives peacefully with his family and tribe. He and Ney’tiri have formed a family and are doing everything they can to stay together, due to marital problems and roles that each one has to play within the tribe. However, they must leave home and explore the regions of Pandora, going out to sea and making pacts with other Na’vi in the region. When an ancient threat resurfaces, Jake must wage an uphill war against the humans again. Even with difficulty, Jake ends up making new allies – some of whom already live among the Na’vi and others with new avatars. Even with an ongoing war, Jake and Ney’tiri will have to do everything to stay together and take care of their family and their tribe.