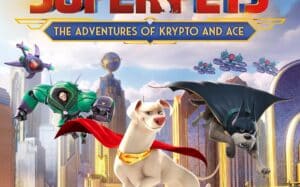 DC Super Pets follows Krypto the Superdog and Superman, inseparable friends, sharing the same superpowers and fighting crime in Metropolis side by side. When Superman and the rest of the Justice League are kidnapped by Lex Luthor (Maron Maron), Krypto (Dwayne Johnson) forms a team of pets that have been given superpowers: a dog named Ace (Kevin Hart), who becomes super strong. and indestructible; a pig named PB (Vanessa Bayer), which can grow to giant size; a turtle named Merton (Natasha Lyonne), who becomes super fast; and a squirrel named Chip (Diego Luna), who gains electrical powers. He must convince the shelter pack to harness his own newfound powers and help him rescue the Super Heroes – and so Krypto creates the league of Super Pets.