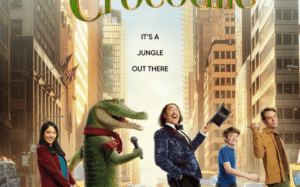 Lilo, Lilo, Crocodile is the eponymous adaptation of the book by Bernard Waber. Hector Valenti (Javier Bardem) is a man who wants to enter the US national talent show, but is always denied a spot. One day, he ends up passing in front of an exotic pet store and comes across a baby crocodile with a peculiar detail: he can sing. Hungry for money and fame, he buys the animal and names her Lilo. To re-enter the contest, Valenti puts his three-story Victorian house on the table, but ends up losing everything when he discovers that Lilo is afraid to sing on stage. Reluctantly, he leaves the house and Lilo with her. Eighteen months later, the Primms family arrives at the house and Josh (Winslow Fegley) the family’s son discovers Lilo in the attic and they end up becoming friends. Valenti ends up returning to his old home for a fortnight and asks Josh for help to help Lilo not be afraid to sing on stage anymore.