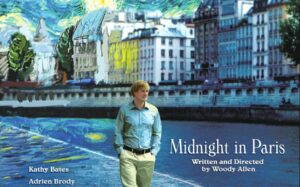 Gil (Owen Wilson) has always idolized the great American writers and dreamed of being like them. Life led him to work as a screenwriter in Hollywood, which made him very well paid, but which also brought him a good deal of frustration. Now he’s about to head to Paris with his fiancée, Inez (Rachel McAdams), and her parents, John (Kurt Fuller) and Helen (Mimi Kennedy). John is going to town to close a big deal and doesn’t bother to hide his disapproval of his future son-in-law. Being in Paris makes Gil question himself again about the direction of his life, triggering the old dream of becoming a recognized writer.