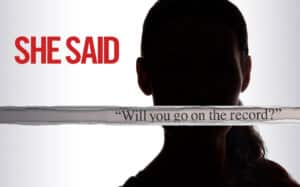 Inspired by true events, the story of two New York Times journalists who changed Hollywood. Megan Twohey and Jodi Kantor write one of the most important stories of a generation, one that helped launch the #MeToo movement and broke decades of silence around the subject of sexual assault in Hollywood. In 2017, New York Times reporter Jodi Kantor receives a report that actress Rose McGowan was sexually abused by Indiewood producer Harvey Weinstein. McGowan initially refuses to comment, but later calls Kantor back and describes an encounter in which Weinstein raped her when she was 23. Kantor also speaks to actresses Ashley Judd and Gwyneth Paltrow, who describe their own sexual encounters with Weinstein, but both asked not to be quoted in the article for fear of a career blow. Frustrated with the lack of progress in her investigation, Kantor recruits Megan Twohey to help with the play.