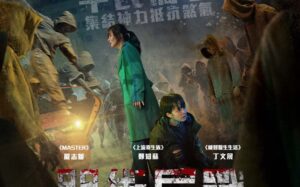 In The Curse – Awakening of the Dead, the police are baffled by a case where it looks like a dead body committed a murder. A reanimated corpse somehow managed to get into the victim’s home before biting him and poisoning him with a toxin more commonly found in puffer fish. Shortly after, reporter Kim Jinhee (Uhm Jiwon) receives a call from a person who confesses to being the real culprit of the crime live on her radio show. He requests a meeting, to be broadcast live the next day, where he demands that the CEO of a major pharmaceutical company issue a public apology. The caller does not clarify what the president needs to apologize for, only that a member of his top administration will be assassinated for every day he refuses to make a statement. This warning marks the first brutal attack by so-called “resurrected corpses”, the victims who died in illegal clinical trials the company conducted.