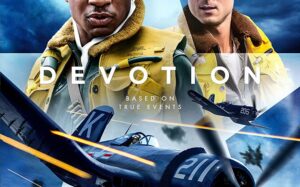 Based on a true story and the book Devotion: An Epic Story of Heroism, Friendship, and Sacrifice by Adam Makos, Brothers of Honor tells the story of two elite airline pilots during the Korean War. Jesse Brown (Jonathan Majors) and Tom Hudner (Glen Powell) are accepted into an elite US Navy squadron for training. Hudner is an impeccable soldier, and Brown is a talented pilot who would become the first black man to fly in combat for the US Navy. In the VF-32 squadron, they will be pushed to the limits to become the best pilots while forming a strong friendship, which will be tested on the battlefield. Meanwhile, conflict between North and South Korea breaks out and the squadron positions itself to destroy a pair of bridges on the Yalu River between China and North Korea, but they can only fire on the Korean side, which will be a daunting task. difficult.