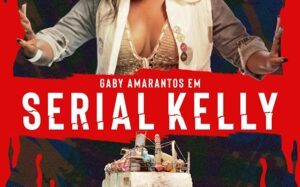 Kelly (Gaby Amarantos) is an electronic hot singer looking to rise. Acid and transgressive, Kelly is strong, owner of herself and owner of her desires. Fulfilling a schedule of concerts in sertaneja nightclubs, or “inferninhos”, Kelly performs in the sertão of Brazil, but does not have many significant opportunities. For her career to become successful, she ends up going too far, and doing everything to achieve her goals, including killing some people along the way. In its path of compulsive consumption and violence, it crosses a new northeast, spiral of an equally apocalyptic development. Investigated for the murder of three men, she uses her traveling gigs as a way to escape while becoming known as Serial Kelly. And from a star on the rise she becomes a marginal heroine, the feared and sought after Serial Kelly, the first female serial killer in Brazil, leaving a trail of dead men along the way.